I’m pretty sure Fink has some German in him. I saw two men with gigantic eyebrows like his. Yes, I took photos, but, no, I can’t post them. They wouldn’t look passable without some cropping, and I’m still being a slacker about installing the right software. I’ll get on that during some free time tomorrow.

Today was a walker. We left for a walking tour around 10:30 a.m., took photos all over the city and learned some history about specific places, including the Brandenburg Gate, the Berlin Wall, the Holocaust Memorial, the bunker where Hitler committed suicide (which is actually underground and not open or visible to the public at all) and Checkpoint Charlie. I learned quite a bit that I didn’t know. I’m not as pleased with today’s photos because they seem so typical and touristy, but today’s tour gave me great ideas for places to go back to later.

We then met with Stine, a German girl, and her sister at Potsdamer Platz to talk about story ideas and the culture of the different districts of Berlin. It was really interesting, and I hope we meet up with her again to go to a market or something. We then moseyed around the Sony Center and took pictures before going back to the hotel. It was a pretty chill afternoon, and while Professor Freeman wandered around Berlin, the students got on our laptops or napped. I climbed into the windowsill and wrote a bit and then slept for about an hour. Once Laura and I woke up, we gathered a group to eat at a Thai restaurant nearby. Later tonight, a group of us headed to a bar for Lauren’s birthday, but Laura and I forgot our IDs like goofballs and a few of us headed back. 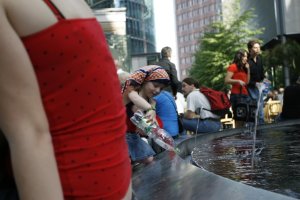 A girl playing with water at the Sony Center.

Abigail’s doughnut from Dunkin Donuts. They’re not this cool in the U.S. New meaning to “ich bin ein berliner …”

Hello, Megan. These advertisements are EVERYWHERE. 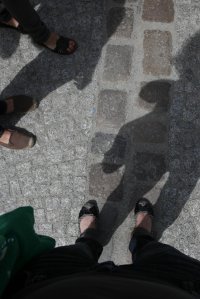 Typical picture … one foot in East Berlin, one in West Berlin. These double stones all over the city show where the wall once stood.

Holocaust Memorial. It’s really cool and better to show with several pictures. I’ll do that when I get back. This is the main place I want to go back to and shoot at night. There are lights around the stones.

Didn’t believe me about the kissing? Well, here ya go, while tons of people are walking all around. It looks like a scene from a movie, doesn’t it? 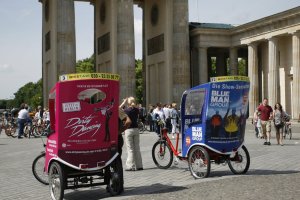 These touristy travel things crack me up. I thought this was the perfect one for my inside jokes – Dirty Dancing with Megan and Blue Man Group with Bobby (Arrested Development … ties in with a segway tour going on. Don’t worry, I have pictures of them, too. And then we bonded with our German tour guide by quoting the show. Ha.)

This is Neue Wache, or New Guardhouse, a memorial for victims of tyranny and war. 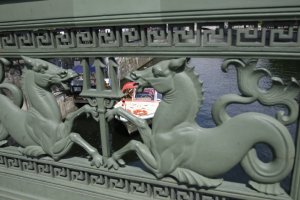 This was just for fun. Berlin has some amazing architecture. And of course I love the river … oh me and water.

So I didn’t write a book for some of you to live vicariously through, but today was pretty touristy and relaxed, mostly bonding with the group. I’ll retell the facts when I flip through pictures with you at home.
Love,
C

6 thoughts on “And the beat goes on”

Tell me what you think! Cancel reply